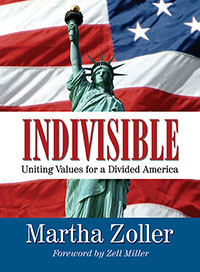 Life, liberty, and the pursuit of happiness are core values that have defined Americans for over two centuries. In a time when many pundits argue that America is a politically divided nation, Martha Zoller, a radio and television personality herself, argues that in our shared national history we have more common ground that unites us as a people than divides us. Beyond this, her book, Indivisible: Uniting Values for a Divided Nation, claims that there are values uniquely unifying among us that can and will propel this great nation into a new day.

While the national media would have America think that the country is evenly split over the major political and social issues of the day, and that the nation’s founding principles are nothing more than glittering prose from a bygone era, the reality is one of stark contrast. The true mainstream is the faith and belief of middle America that holds true to the ideological and political right-of-center. Even though some may disagree on the details, a majority of Americans are not as distant on issues as has been claimed. As Ed Gillespie, Republican National Committee Chairman in 2004, observed during the recent elections, “the red states are getting redder and the blue states are getting purple.”

Martha Zoller pinpoints a wide range of issues where she believes the American public—the voters—are unified, from health care and abortion to terrorism and the war in Iraq to social security and public education. She argues that if the American public embraces the commonality that is inherent, America as a whole will be reshaped into the unified and indivisible form originally intended—a government for the people and by the people.

Martha Zoller is host of The Martha Zoller Show, a daily political talk show on WDUN-AM 550 in the northern region of Atlanta, as well as an afternoon internet radio show on RightTalk.com. She is a frequent substitute host for Linda Chavez, Steve Gill, Ben Ferguson, and other major market radio hosts. Martha was named to Talkers magazine’s 2005 list of Most Important Radio Talk Show Hosts in the Country.

In addition to her work on the radio, Martha is a panelist and substitute host of The Georgia Gang, a weekly public affairs TV program on Fox 5 Atlanta. She is a frequent commentator on the Fox News Channel, CNN and MSNBC.

Martha writes a regular column for AccessNorthGeorgia.com and her work has appeared in the Atlanta Journal & Constitution, Jewish World Review, UPI, and more.

Martha is extremely proud and honored to have been selected to participate in the prestigious Joint Civilian Orientation Conference (JCOC-69), sponsored by the office of the Secretary of Defense and is now a defense expert.

In the summer of 2005, Martha joined the Voices of Soldiers Tour, the first group of radio talk show hosts permitted to broadcast their programs from Camp Victory and inside the Green Zone in Baghdad. This is Martha’s first book.