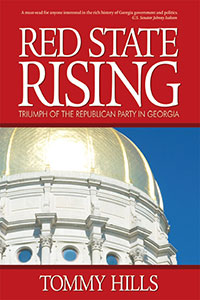 On November 5, 2002—Election Day—most Georgians were surprised to learn that they had elected their first Republican governor in 130 years, becoming the last state of the old Confederacy to break the long-time Democratic lock on the governor’s office and both houses of the state legislature. Former state senator and businessman Sonny Perdue, from the Middle Georgia town of Bonaire, defeated the well-financed incumbent governor, Roy Barnes. In the same election, Democrat Tom Murphy, the longest-serving Speaker of any state House of Representatives in the country, was defeated in his reelection bid after forty-two years in the House, the last twenty-nine of them as Speaker.

By the end of the week, four state senators switched from Democrat to Republican, giving the Grand Old Party control of a single legislative chamber for the first time since the era of post-Civil War Reconstruction. Within two more years, Georgia elected a majority of Republicans to the state House of Representatives, and they, in turn, elected the first Republican Speaker since Reconstruction. Red State Rising: Triumph of the Republican Party in Georgia tells this fascinating story.

Tommy Hills is an eighth-generation Georgian who has been actively involved in the business, civic, and governmental activities of the state for all of his life. He holds a Bachelor of Arts degree in history from Emory University, a Masters of Arts in southern U.S. history from Georgia State University and a Juris Doctor degree from Emory Law School. In 2007 the University of North Carolina School of Law Banking Institute published his Master’s thesis on “The Rise of Southern Banking.” Hills currently serves as Chief Financial Officer for the State of Georgia and previously enjoyed a 36-year career as a senior executive in commercial banking in Atlanta before entering government service.

Hills’ business and governmental experiences have provided him with unique insider access to a number of Georgia’s most influential business, governmental, political, civic and religious leaders over several decades that enabled him to undertake this study of significant political transition in Georgia over the past several years. He has been recognized by Georgia Trend Magazine as one of Georgia’s 100 most influential Georgians for the five years from 2005 through 2009.

Tommy Hills resides in Atlanta with his wife. They have two daughters, five grandchildren and several pets.