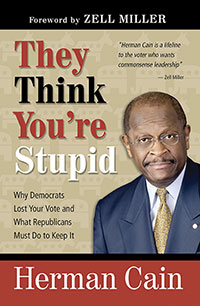 Do the scare tactics, deceptions and distortions of politics frustrate you? Have you grown cynical about the lack of real-issue leadership in Washington? Do you often feel as if politicians are talking down to you—that they think you’re stupid? Well, that is how politics-as-usual make Herman Cain feel.

In They Think You’re Stupid, Herman Cain offers an action plan to help the marginalized voter find a true voice in the political process, while at the same time offering political party leaders an avenue back to the heart of American democracy—the voters. Cain identifies a new voter phenomenon occurring across the nation. Newly registered voters, young African-Americans, unhappy Democrats, and uncommitted Republicans are refusing to strongly identify with either political party. They Think You’re Stupid provides insightful analysis of the factors that have led to what he terms the “politically homeless.” While Democrats are on the road to irrelevancy, Cain believes that Republicans have an opportunity to capture the loyalty of this growing segment of America.

Herman Cain pinpoints a wide range of issues where he believes voters are unified—from the threat of terrorism to “economic slavery.” He argues that the need to see real results around these issues can motivate the politically homeless to become more engaged in the political process, and by their very presence, transform policies and politics in Washington.

Former senator Zell Miller sees Cain’s message as vital for political parties as they approach new elections, “Party leaders would do well to listen to him, all party leaders. Cain is onto something very important for our future. The kind of democracy we have enjoyed for more than two hundred years won’t survive voter apathy. When the voters’ trust is lost, so is their support. To their own demise, many politicians play the politics as usual game and continue to think of voters as mindless and willing to follow anyone because of a few well-placed jabs and sound bites. Candidates from either party who are more concerned with how the party fares will find themselves with plenty of free time on their hands.”

From the perspective of a successful businessman, They Think You’re Stupid offers hope for the disenfranchised voter and common-sense advice to the Republican Party. Cain explains, “The Republicans have a unique opportunity to dominate the political landscape for decades if they do a better job of reaching out to the party outsiders with results, rather than waiting for outsiders to reach in.” Cain sees a new day in American politics, and that day must include a voice for the “politically homeless.”

Herman Cain is the host of the nationally syndicated radio talk-show, “Herman Cain with The Bottom Line.” The show is designed to inform the audience of the facts, and challenge the rhetoric on the big economic issues of the day.

Cain launched the “New Voter’s Alliance,” a vocal and persistent organization that works to influence public policy and inspire voters to become involved in legislative decisions. He has also created the “New Voice Foundation,” which educates voters on issues of economic importance.

Herman Cain ran in the 2004 Republican primary for the U.S. Senate in Georgia. He surprised political analysts by finishing a close second in the three-way race, even though it was his first attempt for public office. His success in attracting a broad new audience of voters inspired him to write this book.

He has also served as senior advisor to the 1996 Dole/Kemp Presidential campaign and was appointed to serve on the 1995 Economic Growth and Tax Reform Commission.

Herman Cain is a successful businessman, best known for the dramatic turnaround of Godfather’s Pizza under his leadership while President and Chairman. He has also served as CEO and President of the National Restaurant Association and as Chairman of the Federal Reserve Bank of Kansas City. Cain is an accomplished and popular speaker, and has authored four books on topics ranging from leadership to politics.